helicopter was shot down, killing 30 US Troops.

Most of these 13 troops were in their early 20`s and sadly, they look

even younger in their pictures.

We decided to create a "everlasting" memorial for these fallen HEROES

for many reasons, the most important being that their young lives and

long after the news headlines fade into obscurity.

These scars will (unfortunately) live on forever with these families.

These 13 brave men & women join the countless other warriors

who have sacrificed their lives for the ongoing fight for enduring

freedom... and for that, it is OUR duty to NEVER stop saying their names,

in their HONOR and help bring healing to their families.

Many family members of these fallen HEROES

have not only been devastated and forever changed by the

loss of their loved ones, but are also angry at the way the whole

situation was handled by the administration & military itself.

"The commanders on the ground should have recognized this threat and 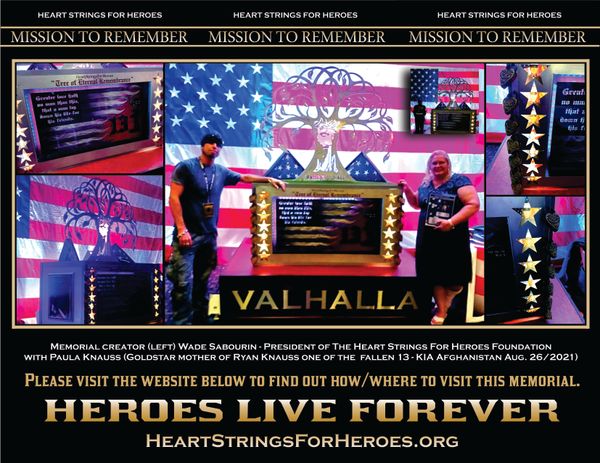 Our eternal tribute spotlights all 13 men and women

The SCULPTURE itself is precision cut out of aluminum

and stainless steel to fortify its endurance to stand

the test of time.

The PURPLE wood that is prominent under the

with its rich, beautiful purple color... and has NOT been dyed or stained

Purple represents the Purple Heart Medal given to those

injured or killed in combat.

attack and devastation that took place on

withered, torn and burned... our AMERICAN SPIRIT can NEVER be

destroyed and will continue on in all its glory as a

symbol of AMERICAN FREEDOM and resilience.

Attached to each picture of the fallen 13 HEROES

is a HEART SHAPED LOCK, engraved with each name of the fallen.

The LOCK secures that our commitment to honoring and

never forgetting each name, their service

and their ultimate sacrifice... is NEVER BROKEN.

"Greater love hath no man than this, that a man lay down his

life for his friends." Is carved into the flag to represent the LOVE that each

of these warriors had for their country and the sacrifice they

made for their fellow man.

The TREE SECTION represents the continuous life that flourishes

with the memory and spirit of those who laid down their lives.

Inside the bottom of the TREE, our LORD JESUS CHRIST watches over and

AMERICAN HEROES laid to rest, on foreign and domestic soil.

The word VALHALLA is displayed at the base of the memorial.

The meaning of VALAHALLA is “Hall of the Fallen”

“Until Valhalla” is a common phrase amongst soldiers, which

simply means; when a warrior ends his life in a heroic battle

he enters VALAHALLA… a sacred place for only those who

have fought and died in tough battles. This was motivation

for Viking warriors, in the middle ages, to fight until death.

When we created this memorial,

our goal was have a permanent symbol

reminding us of what TRUE SACRIFICE looks & feels like

and to help heal the families left behind, reassuring them

their child will never be forgotten by a grateful nation.

We also dedicate this memorial to ALL fallen

We are proud to announce this will be on permanent display at: